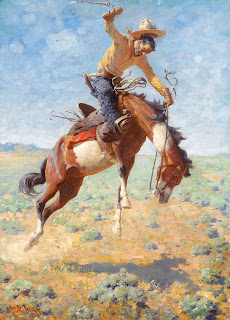 I could not help it … I’ve found so many of the pictures of William R. Leigh so beautiful, I had to continue.  And I also thought that there would be no better way to celebrate July 4th than by looking at some of Leigh’s gorgeous examples of pure Americana.

Many of the pictures of William Robinson Leigh (1866 –1955) depict landscapes of the American West and various scenes from the lives of her native peoples.  However, it was relatively rare that Leigh painted the cowboys who flooded the West and transformed the land into the country we know today.

There are few myths more potent than that of the American cowboy.  He is the US equivalent of the knights errant of old, our great national hero, and the exemplar of what all boys wanted (at one time) to be.

Today, the myth of the West has been tarnished for a variety of political reasons, not the least of which is political correctness, which would condemn the cowboy (and the entire Western genre) as sexist, racist, exclusionary, and, who knows, even guilty of halitosis.  Critics who dismiss the West (both in art and literature) seem never to have really read Western novels or looked at Western pictures – they never really have a proper understanding of the genre.  A quick look at the works of Jack Schaefer (1907-1991) or Owen Wister (1860-1938) or Zane Grey (1872-1939) would quickly give lie to the racist/sexist canard, and the aesthete can look at the beautiful pictures of Charles Russell (1864-1926) and Frederic Remington (1861-1909) and many others without a pang of guilt – the pictures are magnificent and the “political” message, if there be any, minimal.

There are other, equally pernicious, nails in the coffin of our great American Western myth.  First is the increased urbanization of the US – fewer and fewer people are living in rural areas, and many young people find it easier to relate to myths involving aliens and other planets than the pioneers who lived a rugged life on the frontier.  Another is our sedentary culture, where the idea of vigorous life (outside of the gym, at least) is met with smiling condescension, and, of course, the influx of peoples from other countries who would much rather forget those heroes who built the land and merely accept it benefits.

But, whatever the reason for the decline of the great Western myth, let’s pause to consider Bucking Bronco with Cowboy, painted by Leigh in 1913.  The picture is 30 x 22, oil on canvas, and currently up for auction at the Jackson Hole Art Auction, set for September 15th, 2012 at the Center for the Arts, 265 South Cache, Jackson Wyoming.  Along with this magnificent Leigh, works by Russell, Remington and Albert Bierstadt will be on hand.  More information can be found at:  http://jacksonholeartauction.com/

Bucking Bronco is unusual in that it is painted in a more Impressionist manner than Leigh’s other works – the cowboy, though realistically depicted, is painted with broader strokes than is usual for the central figures of many of his pictures.  The horse is magnificently rendered, with a great sense of motion and animation.  Here Leigh’s highly trained grasp of anatomy – both human and animal – are a great boon to the overall realism of the scene.  Too often in Western paintings it’s clear that the artist has never seen a horse; Leigh clearly knows horse anatomy and the best ways of realistically manipulating it.

Leigh uses a heavily loaded brush for his impasto effects of the sky and landscape.  His thick application of paint in this picture is particularly luscious, and his vibrant coloration a mini-July 4th celebration with every look at the picture.

As is often the case with Leigh, it is little touches that true devotees savor.  Look at the studs lining the back of the cowboy’s saddle, or the completely realized reins held by the cowboy.  Even the cowboy’s quirt is alive with a peculiar animation.

Bucking Bronco With Cowboy is one of those pictures that makes me happy just looking at it.

More William Leigh tomorrow!
Posted by James Abbott at 7:00 AM

this is familiar to me :)

James Abbott
James Abbott is a California-based writer and arts advocate. His online column The Jade Sphinx (http://thejadesphinx.blogspot.com/) champions the Fine Arts, featuring stories on such concepts as recognizable quality, artistic heritage and tradition, and techniques of the Great Masters.