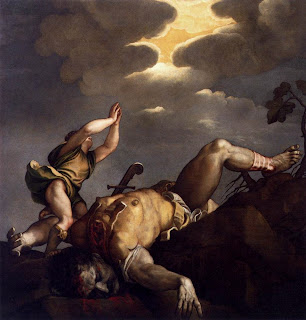 Simply a magnificent painting by the Venetian painter, draughtsman and designer Titian (born Tiziano Vecellio 1489-1576).  Perhaps the greatest Venetian painter of the Renaissance, Titian was called by his contemporaries The Sun Amidst Small Stars (after the final line of Dante’s Paradiso).  He was a remarkably versatile painter, equally at home with landscapes, portraits and large narrative pictures.  He is particularly important to art history because of his unique mastery of color.
Titian was born in Pieve di Cardore, in Venice, and lived to be quite an old man by Renaissance standards.  His style changed often throughout his lifetime, but his serious study and application of color was a constant throughout his career.  His later works were, perhaps, muted compared to his earlier pictures, but his overall approach also grew in subtlety.
This painting is now in the church of Santa Maria della Salute in Venice. It was originally made as a ceiling painting for the Santo Spirito in Isola; Titian made two other ceiling paintings for that church, Cain and Abel and the Sacrifice of Isaac.
Look at the barren landscape Titian uses for his tableaux – nothing save some rocks and the merest hint of vegetation and blasted scrub to the right.  The place – and perhaps not even the time – are not important in this picture, rather, the only reality of the picture is the eternal struggle between boy and monster that take up frame.
Unlike Donatello’s bronze David (or Michelangelo’s, which we will look at later this week) David is mostly clothed.  (Indeed, he wears more clothing than the traditionally heavily armored Goliath.)  Curiously, his simple tunic rides heavenward, revealing his leg and the curve of his bottom.  His arms, too, are extended heavenward, obscuring his face and placing emphasis on his musculature.  I find this fascinating – the Biblical text specifically describes David as ‘beautiful,’ but it seems as if Renaissance artists make a point of eroticizing the boy hero.  This is not surprising as David was the patron saint of the Florentine state, and the Renaissance put a very high premium on male beauty.
David’s physical proximity to the fallen giant is surprisingly intimate, as if here were straddling the corpse of his foe.  The size and musculature of the brute are clearly contrasted to that of the boy; this painting includes a particularly gratuitous wound where the head was severed from the body.
Titian’s superlative use of color is also demonstrated by the exsanguinated body of Goliath.  The arms and head are already white marble, the blood having run from his dreadful neck wound.  The face of Goliath, though fierce, seems curiously at peace.  One cannot help but wonder if this monster is glad to finally be free of his own brutality.
Titian again uses vibrant color in the sky and the heavenly light it sheds on the scene below.  Look at how the clouds draw in white-yellow radiance close to the opening, and build into brownish grays moving away from the light.   More importantly, look at how the light plays on the arms of the triumphant David, also highlighting part of his torso and his leg – as if God sends a signal of approval to His champion.  The same light falls on Goliath, but rather than adding tints of celestial color, the light of heaven renders him yellowed or dead white.
One last thing before we stop looking at this extraordinary picture – note Titian’s command of drawing.  The basis of all great painting is sound draughtsmanship, and take particular note of Goliath’s toes and fingers, the curve of his great sword or the extreme foreshortening of the composition.  This is a splendidly drawn painting, and Titian’s anatomy and composition – his entire dramatic narrative – are unlike any other depiction of the story.  Titian’s David and Goliath is, simply, one of a kind.
Posted by James Abbott at 7:26 AM

In an article I wrote for "Venezia Cinquecento" a few years ago, I presented three insights. Firstly, Goliath's torso and right leg are directly borrowed from the "Laocoon". Secondly, Goliath's right hand is the right hand from Michelangelo's "Moses". (Titian had visited Rome in 1545.) Thirdly, the painting can be read on a nationalistic level in addition to the more obvious Biblical one. The head of the Turks that Titian painted in other paintings strongly resemble the head of Goliath. In other words, the painting represents little Venice (David) triumphing over the huge Ottoman Empire (Goliath). What do you think?

James Abbott
James Abbott is a California-based writer and arts advocate. His online column The Jade Sphinx (http://thejadesphinx.blogspot.com/) champions the Fine Arts, featuring stories on such concepts as recognizable quality, artistic heritage and tradition, and techniques of the Great Masters.